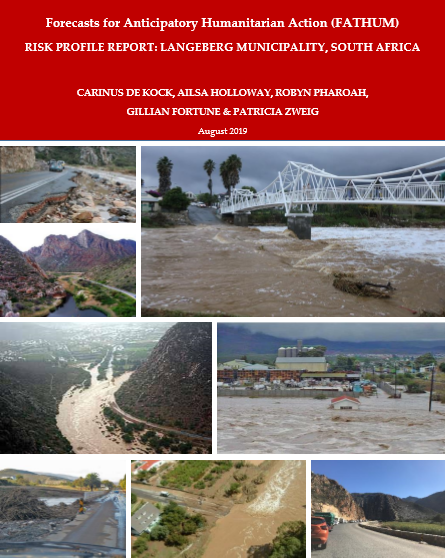 From 2003 – 2014 the Langeberg Municipality in the Western Cape Province of South Africa was substantially affected by six flood disasters which resulted in almost USD 22 million in damages, caused one fatality and left a total of 6 424 people displaced. Severe weather events during this period had widespread municipal and provincial infrastructural, private agricultural as well as social impacts, which also led to a disruption in service delivery. Literature indicated that these floods were caused by complex and interconnected hazard, vulnerability and disaster risk governance factors, some more prevalent and recurring than other, which increased flood risk. This study illustrated how many inter-related contributing root causes affect flood risk and that consequently, a holistic, up-to-date understanding of these is required to identify most exposed areas and most vulnerable people, in order to focus early warning and impact – based forecasting efforts more efficiently and effectively. 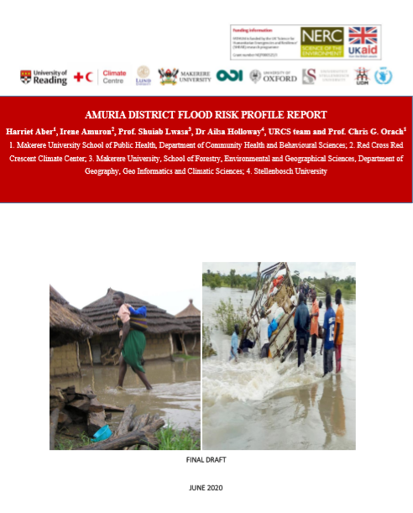 In 2007 between July- November, unusually heavy rainfall led to flooding and water-logging across eastern and northern Uganda (Soroti, Amuria, Katakwi, Bukedea, Kumi, Lira and Sironko Districts), giving rise to a major humanitarian response across all sectors. About 20,000 households were severely affected and 58,000 people displaced. The floods also disrupted delivery of social and economic services such as education, healthcare, trade and agriculture. This resulted in increased risk of communicable diseases especially as the flood waters receded. Malaria and diarrhoeal disease incidence increased by over 30%. The Teso sub region particularly faces annual incidences of flooding that often alternate with dry spells in the subsequent year. Within the region, Amuria and Katakwi districts have been the hardest hit by flood episodes. In a bid to develop interventions to manage flood disruptions, the Uganda Red Cross Society (URCS), together with the German Red Cross launched a pilot Forecast based Financing (FbF) approach in two selected communities of Amuria District, Kapelebyong sub-County. The intervention sought to mitigate flood impacts by building community preparedness capacity before floods occur. This report gives insight into the flood history, drivers of flood risk, early warning and flood governance in Amuria district. 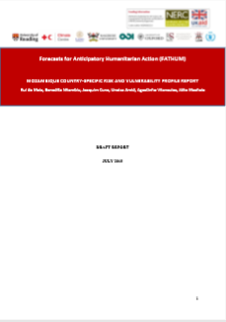 This report summarizes the results of a study designed by a transboundary three-party team of researches and conducted by researchers of UDM’s Centro de Investigação e Extensão from 2017 to 2019. The report describes the biophysical drivers of risk (disaster risk profile and history), the local disaster risk management capacity and institutional arrangements as well as the established early warning systems.

The purpose of the study was to determine the relevance of these factors in the implementation of Forecast based Financing (FbF).

The Knysna Fires of 2017: learning from this disaster 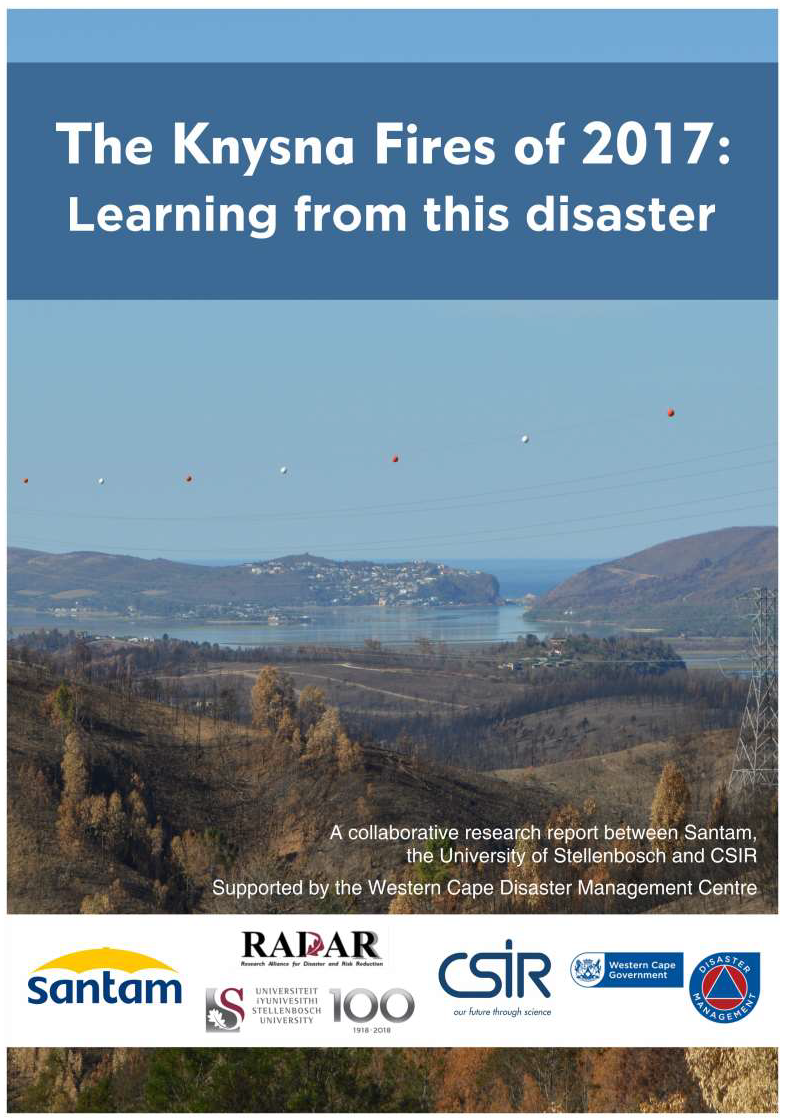 The Knysna fires were arguably the worst wildfire disaster in South Africa’s history. The social and economic impacts will be felt by Knysna and its inhabitants for years to come. It is critical that those responsible for fire management in rural and urban environments, as well as citizens, learn from this experience and become far better prepared to deal with wildfires in the future. Wildfires will continue to occur but there is a lot that can and must be done to avoid further disasters of this magnitude.

Off the Radar: High Impact weather events in the Western Cape, South Africa 2003 - 2014 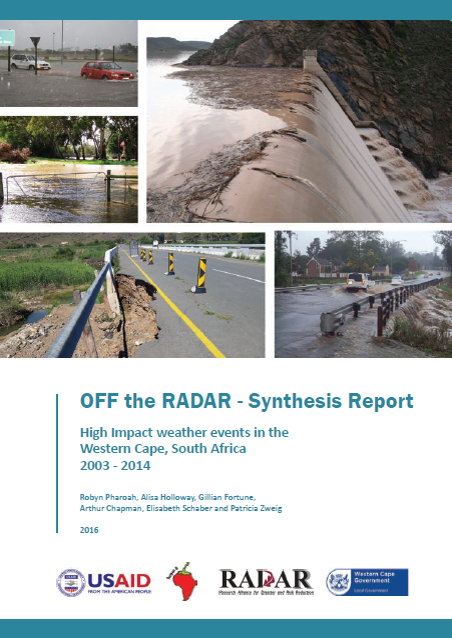 Between 2011 and 2014, the Western Cape was severely affected by five high impact weather events that led to four provincially gazetted flood disasters. All five of the flood-triggering weather processes were associated with identifiable cut-off low (COL) weather systems that respectively passed through the province between 7-9 June 2011, 13-14 July 2012, 7-11 August 2012, 15-17 November 2013 and 6-10 January 2014. The research was undertaken by the Research Alliance for Disaster and Risk Reduction (RADAR) at Stellenbosch University, in collaboration with the Western Cape Provincial Disaster Management Centre and the Western Cape provincial Departments of Agriculture and Transport and Public Works. 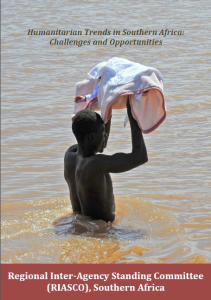 A groundbreaking study into the threats likely to confront southern African communities over the next decade has been released. Titled Humanitarian Trends in Southern Africa: Challenges and Opportunities, the study identifies regional and global factors that may impact the lives and livelihoods of southern Africans and, as importantly, the available capacities to address these challenges. 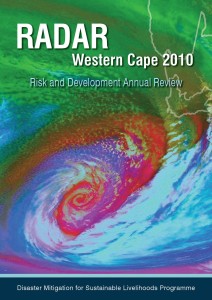 RADAR was developed between 2009 and 2010 by UCT/DiMP, following the completion of extensive research on six years of severe weather events and social violence in the Western Cape. The maps, tables and other information presented here represent almost ten years of focused ‘ex-post’ or postdisaster research in the Western Cape, and have been derived from post-disaster studies commissioned by provincial and national government, as well as by the City of Cape Town (CoCT). 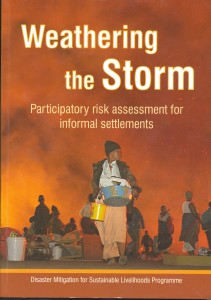 Weathering the Storm reflects current international practice in participatory risk assessment. It describes an approach to risk reduction that actively engages residents of informal settlements, as well as their civil society and government colleagues. This guide has been tailored to the disaster risk profile of the Wand to the cultural and language needs of disaster risk and development practitioners in the province - although many of the issues profiled may applying other settings. 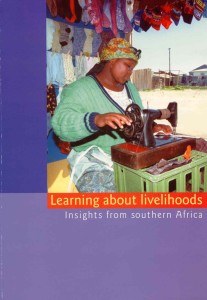 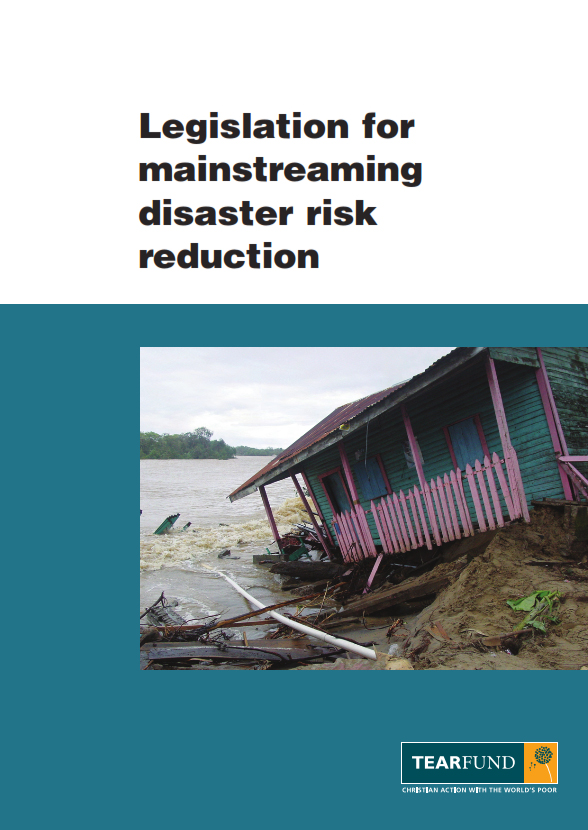 Tearfund’s Environment and Disasters advocacy strategy aims to help vulnerable people reduce disaster risks through increasing government commitment to implementing propoor disaster prevention policies and practices. The aim of this report is to encourage national and donor governments to develop and improve their disaster risk reduction legislation. Legislating for disaster risk reduction (DRR) is a crucial step in mainstreaming DRR into development. Principle Author(s): M. Pelling and A. Holloway 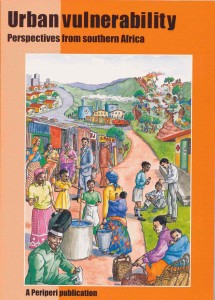 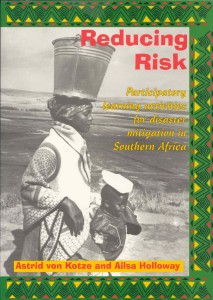 This book is primarily a tool for Southern African practitioners working with highly vulnerable communities. If you are planning to facilitate a series of learning activities in disaster reduction you may want toi use this book both as a reference and as a 'how to manual'.If you work as a development agent 'Reducing Risk' should provide you with ideas and suggestions for training/ learning activities.

By A. von Kotze and A. Holloway 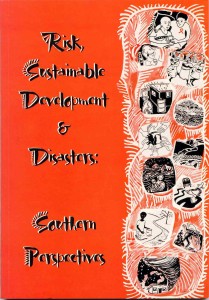 This issue coincides with the closing event for the International Decades for Natural Disaster Reduction - the IDNDR Programme Forum, convened in Geneva, Switzerland. During the past ten years, the IDNDR has advocated for greater attention to the reduction of natural disasters - to avert human, property and other losses. While Southern Africa is seldom viewed as vulnerable to natural threats, that is compared to Asia and Latin America, the subcontinent lives with rising patterns of social, economic and environmental vulnerability. 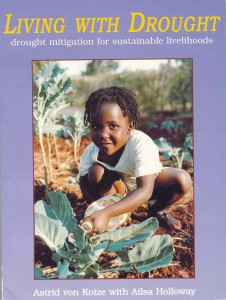 This pack aims at complementing other 'disaster management training' materials. These activities specifically emphasise the important role that development and aid workers paly in long-term planning and action in drought prone communities. They do this by strengtening and understanding, skills and knowledge necessary for including risk reduction into development practices.

By A. von Kotze and A. Holloway